Jelly Making is always a fun learning experience to most children. I have tried this activity with many preschoolers but this was the very first time I tried making jelly together with a toddler :) Le Xin displayed her ability to listen to instructions and she was really observant during the whole process. 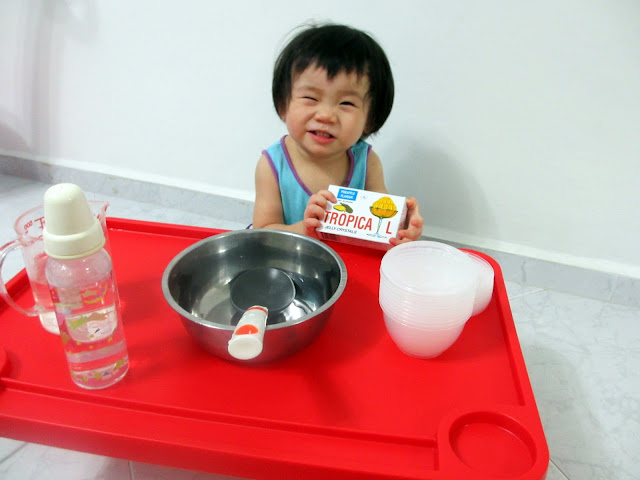 Le Xin showing the jelly crystals that she was going to use to make her jelly. She tried to wink her eyes how cute! 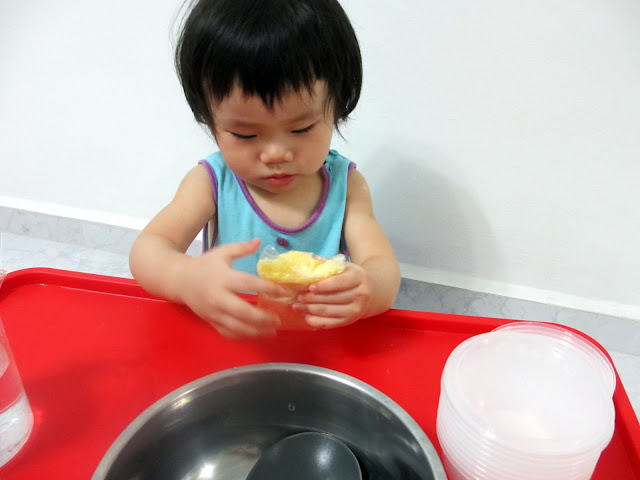 After opening the box, Mummy passed the packet of jelly crystals for Le Xin to observe and she really took a very close look at it. 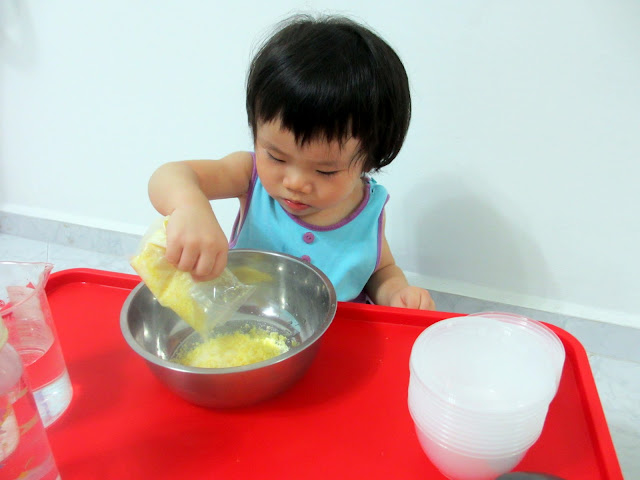 Le Xin poured the jelly crystals into the bowl. 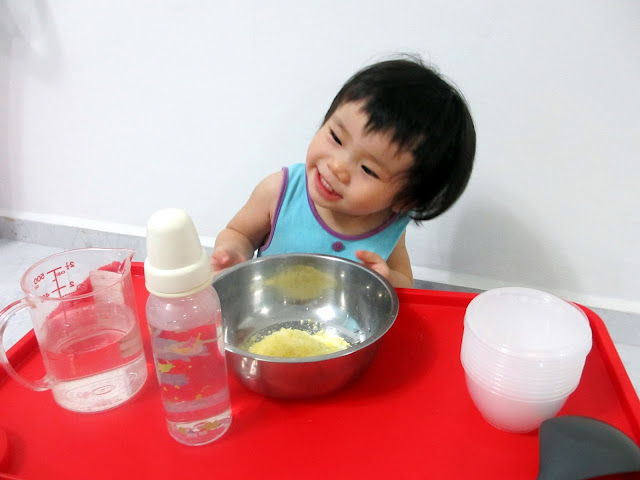 I really love this photo very much, she knew I was taking a photo of her and she tilted her head as if she was trying to tell me What's next hahaha! 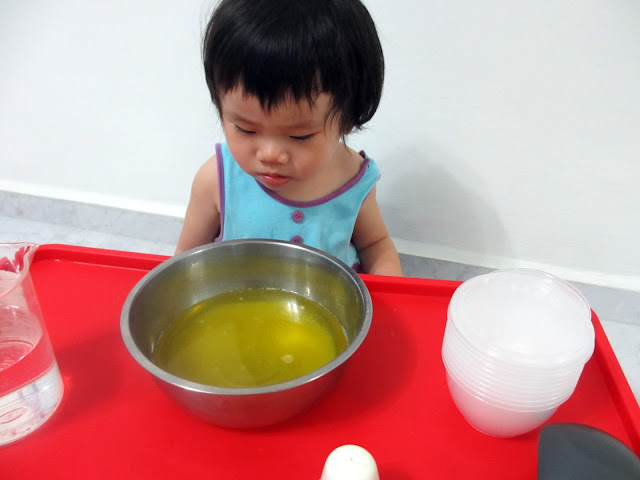 At the start of this activity, I prepared 240ml of hot water in her milk bottle and capped it tightly. I warned her not to touch it and explained to her that it was very hot. After Le Xin finished pouring the jelly crystals into the bowl, I helped to put the hot water in because it was really too hot for her to try and I am worried about the safety aspect. When Le Xin saw the yellow crystal disappeared and the mixture turned yellow, she said Wow! 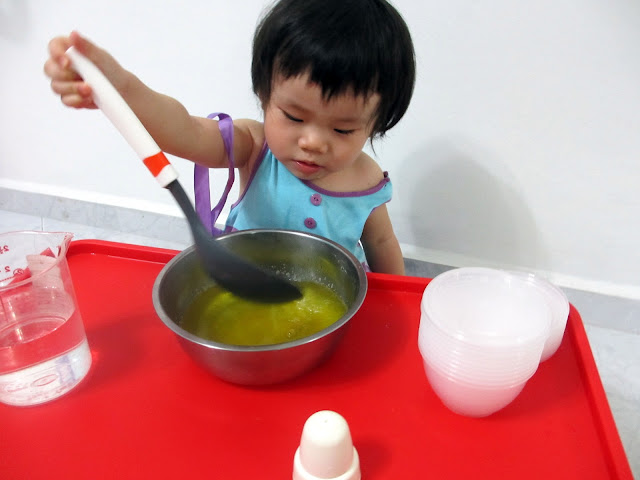 Le Xin began to stir the mixture, as she stirred she also realised that the crystals were all gone and everything turns into liquid, thus learning the concept of "dissolving". 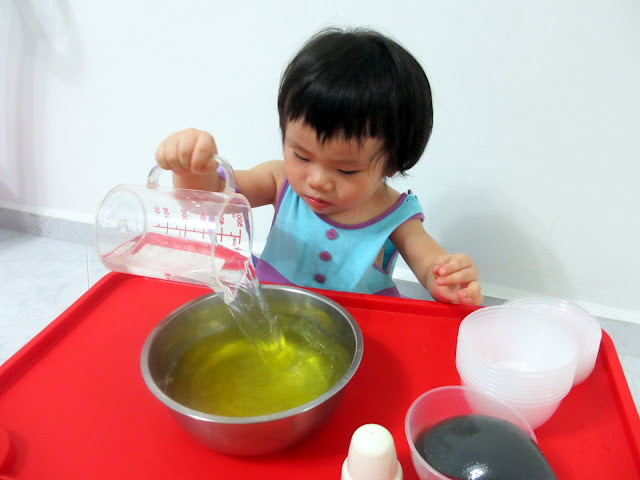 Then Le Xin poured the 250ml of cold water into the mixture. She was very confident as she poured the water in. No spillage at all! Well done my darling girl! 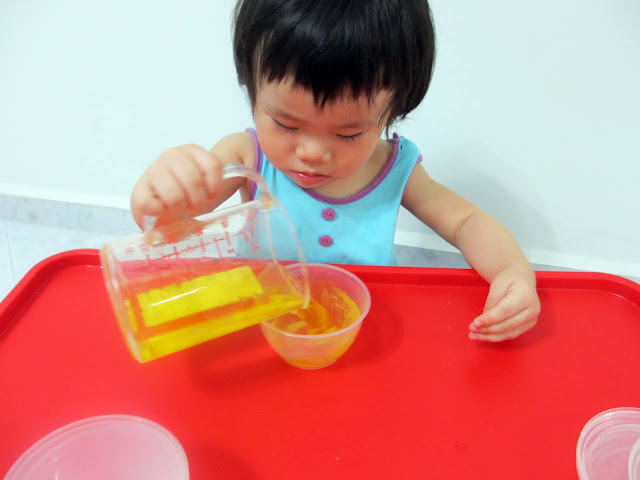 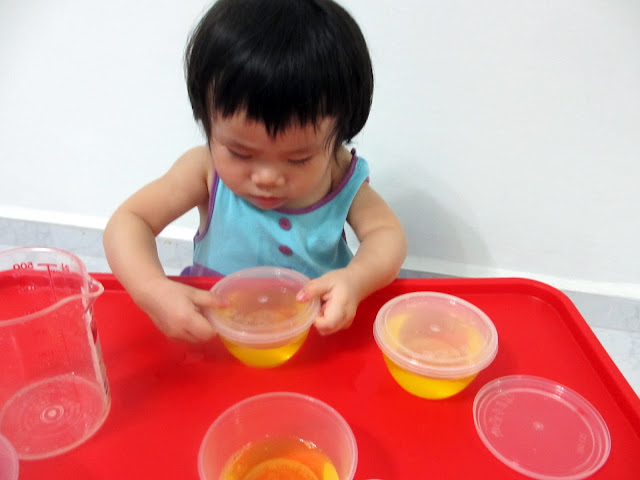 Look at how focused she was! I guess she was really serious about her role of helping to pack the jelly. When I passed the cover to her, she helped to press it till she heard a "clicking" sound. 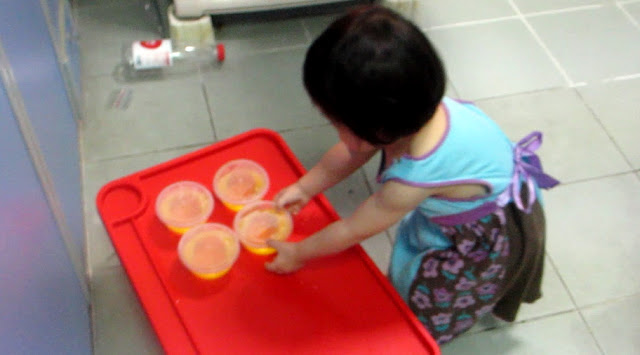 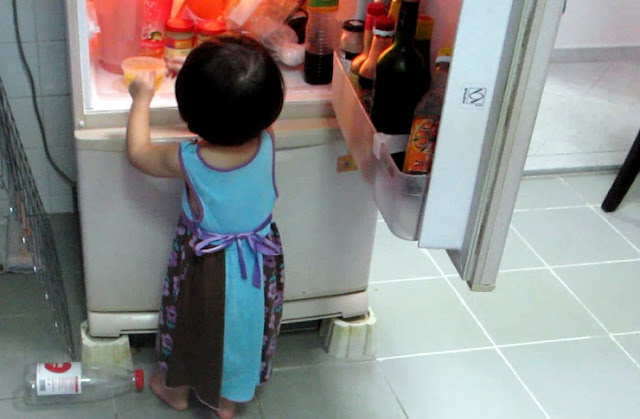 I took a five minutes video of her keeping all the 4 containers into the fridge but the file size was too big and I can't upload it here. Nonetheless, I did two print screens from the video and this was how she took the container one by one to keep it. 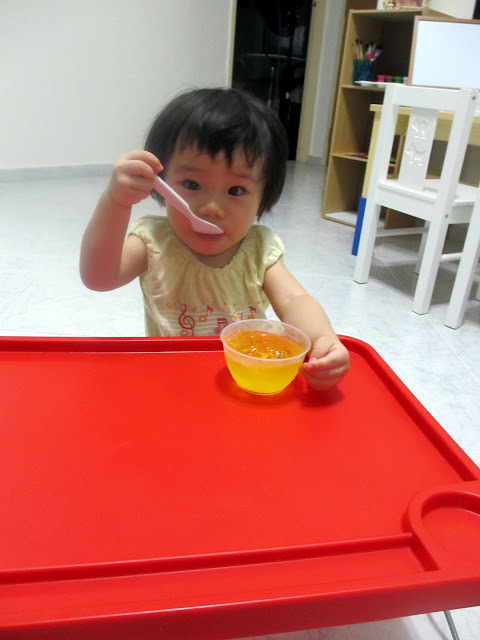 The next day in the morning, the jelly was ready for consumption. I told her Le Xin I think the jelly is ready, do you want to eat them? She nodded her head but when I showed it to her and she noticed that the jelly had turned from liquid to solid, she was reluctant to try it. In fact, she even ran away from it. I guess she might be afraid of wobbly stuff haha.

At night, I took the jelly out for her to observe again. Firstly, I asked her to tilt the container upside down and she noticed that the jelly stayed at the same position. I told her that the jelly has harden thus sharing the big idea about "solidifaction" which I don't think she understand but she was really excited to touch the jelly with her fingers when I opened the cover. I didn't want her to eat the jelly initially because she was still coughing but of course one or two scoops of jelly wouldn't worsen her condition I guess so I asked her if she wants to try eating it and she agreed. She sat down and ate a few scoops of the jelly she made. She appeared to like it very much but sadly I had to stop her and explained to her she can't have too much of it as she was coughing and she gave the container back to me. How comforting to know she could accept my explanation.

Have you tried making jelly with your children/students? It's easy and exciting, lots of concepts to learn from it too. Best of all it always turn out to be a great dessert after a long hot day!
Posted by MummyT2X at 07:30