I have been reading with Le Xin about the story "The Hungry Caterpillar" by Eric Carle. So over the weekends, Le Xin and I made a butterfly together using a toilet roll. Today, when I went to fetch Le Xin from school, Teacher Lin told me she has a "homework" for me and Le Xin to do! Wow, it must be something interesting and I was really looking forward to do it with Le Xin.

It's actually a Parental Involvement activity where I need to cut out some circles and use them to make a picture together with my darling girl. I hope the parental involvement letter could explain to the parents the purpose of the activity instead of just stating the instructions so that I can have a better idea on what the activity is about and why is there a need to do this but since it is not stated, I just took my own initiative and used this opportunity as a follow up activity for the hungry caterpillar story.

Firstly, I get Le Xin to read the story "The Hungry Caterpillar" with me. She tried to said certain words like moon, sun, caterpillar, butterfly  and egg. She also pretended to eat the fruits in the story, haha so cute!


Then I asked Le Xin if she would like to make a caterpillar and she nodded her head. I helped Le Xin to cut out the circles from the template given to me as part of the parental involvement letter. She waited for me patiently, playing with her cotton balls as I cut out the circles. I showed her the shapes and she actually said circle to me, not very clear but Mummy was pretty impressed! 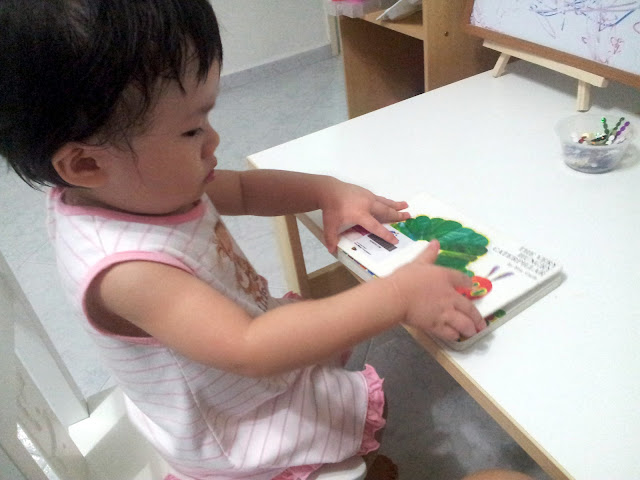 Le Xin was able to identify the caterpillar when I asked her Le Xin where is the caterpillar in this book? She flipped to the front cover and used her index finger to point to the caterpillar then she tried to say a word that sounded like caterpillar but she was not ready to articulate the word yet. 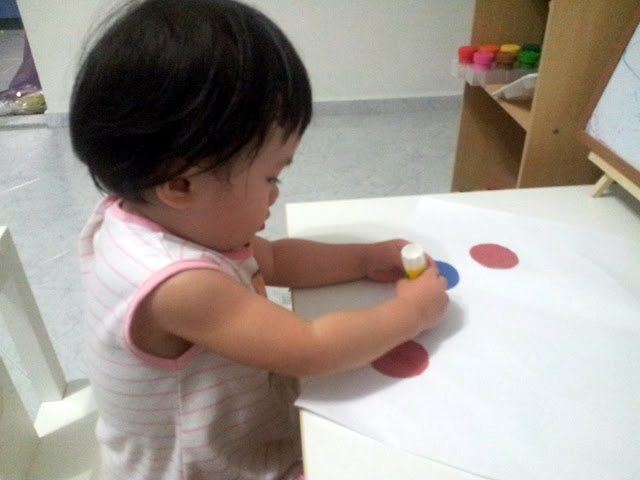 Even though Le Xin was not ready to cut the circles, she was very eager to help Mummy with the pasting. Holding her glue stick firmly on her hand, she moved her hands up and down and rubbed the glue stick onto the circle. 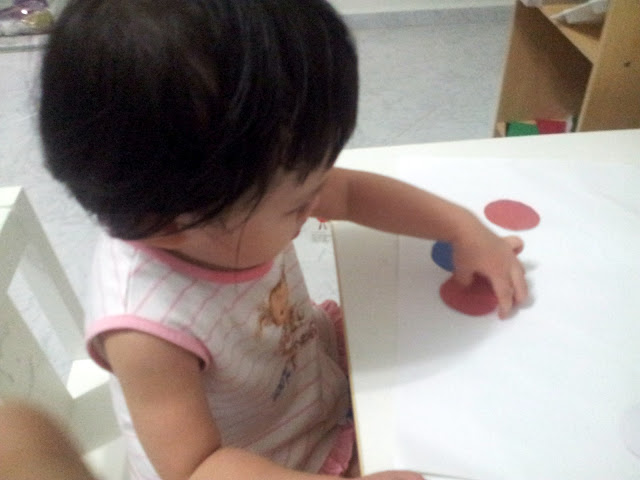 Then I told her that she needs to flip the circle upside down to paste it and demonstrated to her how to do it. The minute I took one of her circles, she started to scream like mad, it appeared that she was protesting to me that she really knew what to do and I shouldn't be showing her :( Wow these days some of the toddlers really know their rights :p 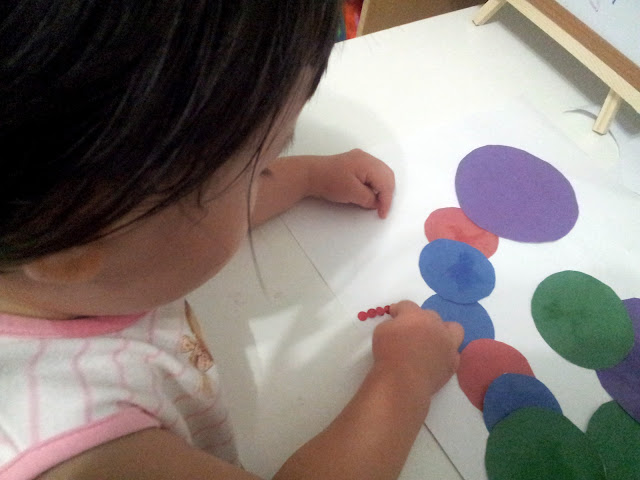 Le Xin took one of her glittering stickers and started to stick the legs for the caterpillar that we were making but she just stuck one or two stickers and began to lose interest  so her poor Mummy had to help her to stick a few more....just kidding :) 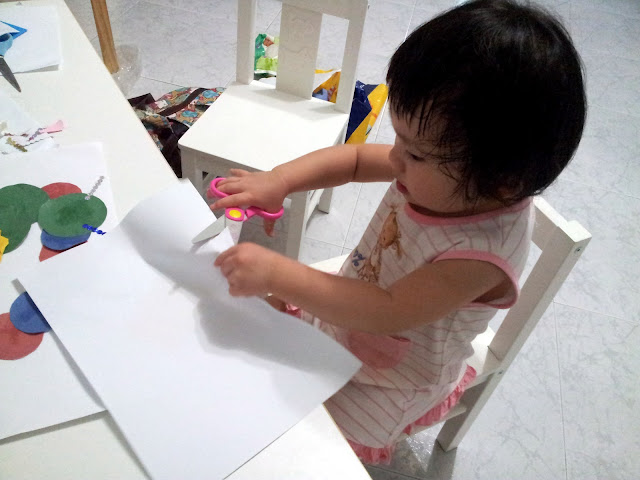 Then Le Xin went over to the art shelf and picked up a piece of white paper. She used her scissor and started cutting a small piece of paper.When I asked her What are you doing?  I want cut! replied Le Xin so I asked again Le Xin do you want to use this paper for the caterpillar's eyes?  and she nodded her head. 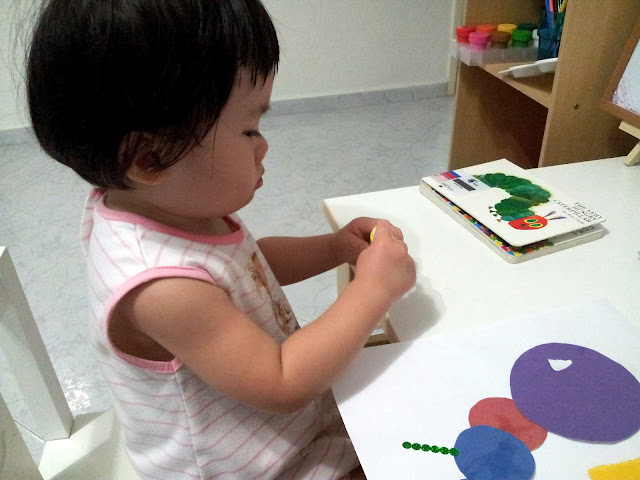 Next, she found a new trick to paste; she used her finger to dig out a small piece of glue and started to rub her finger on the circles, mummy suggested that she could put the glue on top of the caterpillar's head. We went to look for pipe cleaner to use it as the caterpillar's tentacles (I thought they are called antennae/feelers but strangly it's not according to Enchanted Learning) When I asked Le Xin what colour would you like to use for the feelers? She took the red pipe cleaners and I said Ohh so you want to use the red pipe cleaner? and she repeated after me Red! 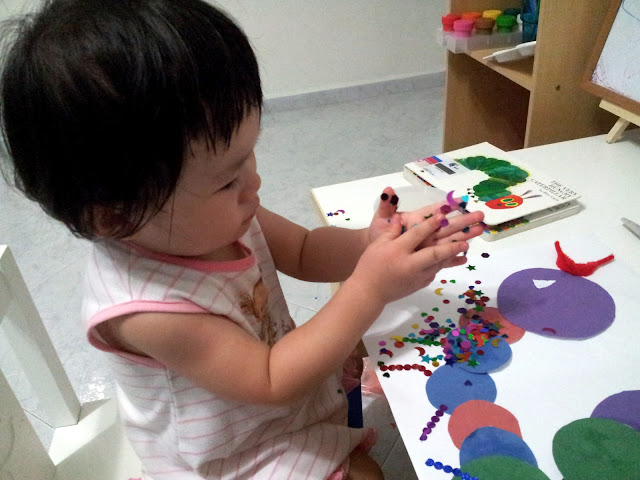 Then after rubbing all the circles with plenty of glue, we grabbed lots of glitters of different shapes and colours and started sprinkling all over the caterpillar. Le Xin was very disturbed by the glitters that were stucked onto her hands but Mummy was not bothered and continued to play with the glitters so now who was the one doing the caterpillar in the end? Alright, Le Xin did help to sprinkle but I need to reassure her a few times Don't worry about the glitters on your hands, we can wash your hands later, alright? 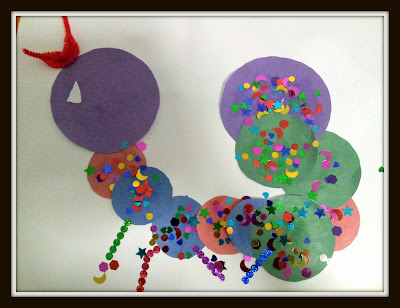 Home-school partnership is not just about getting parents involved in an activity but above all it's about building a special bonding. A triangular bonding of the teacher, the child, and the parent(s). Thank you very much MFS, I enjoyed this activity and I hope the rest of the parents in Le Xin's class will enjoy this process too!
Posted by MummyT2X at 07:56