Sometime ago, I was reading this story to Le Xin... 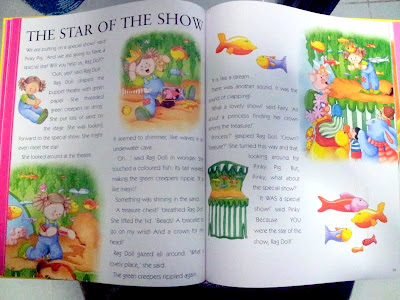 The Star of the Show! Somehow she was really excited about the pictures in the story.... 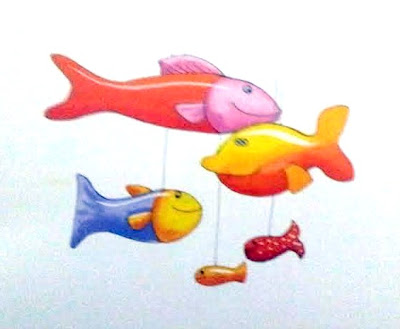 Especially when she saw this! Haha it's a little fish mobile at the right hand corner of the page. She kept pointing to it and said Fish!
So I asked her Wow that's a fish mobile, it looks really nice isn't it? Do you know what's a fish mobile? Would you like to make one? She nodded her head and appeared excited.
I knew this would definitely lead us into something fun and interesting so over the weekends....
I decided to make a FISH MOBILE with my darling girl!
It was not as easy as I thought it was going to be....her interest swings like a pendulum :(
On the first day, she was really keen when I drew 4 fish outline on a drawing board and cut it and asked if she would like to help to decorate it. 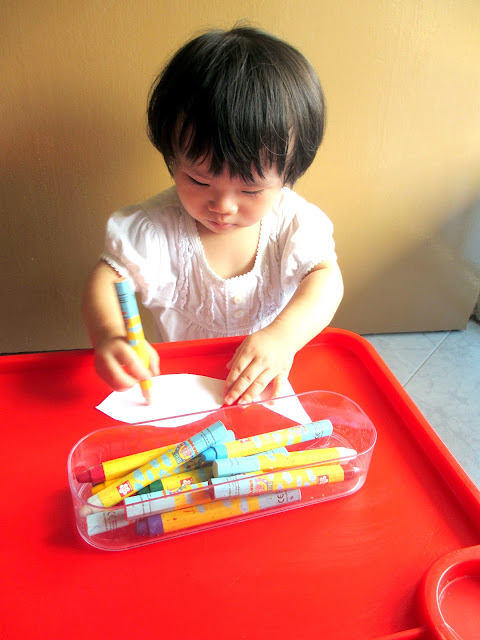 And yes, she did! I provided her different materials to choose from and she used crayons to decorate her first fish.....She appeared to have so much fun scribbling. 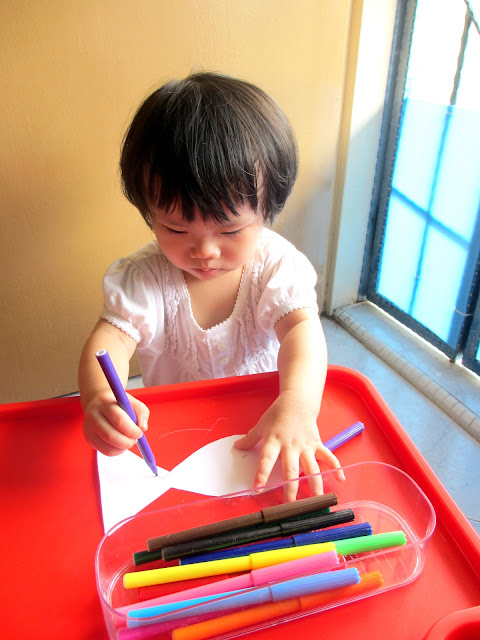 Then she went on to explore the magic pens which I bought her from Daiso to decorate her second fish...
After colouring one side of her fish, she completely lost the interest to decorate....I tried to ask her to carry on with her work and she scribbled the other side with markers for a short while and stopped. I felt that since she wasn't interested to decorate anymore so I should redirect her to do some other activities.
About six days later, she suddenly went to the Atelier with another two undecorated fishes and began to decorate them again on her own. This time she decided to explore with other mediums. 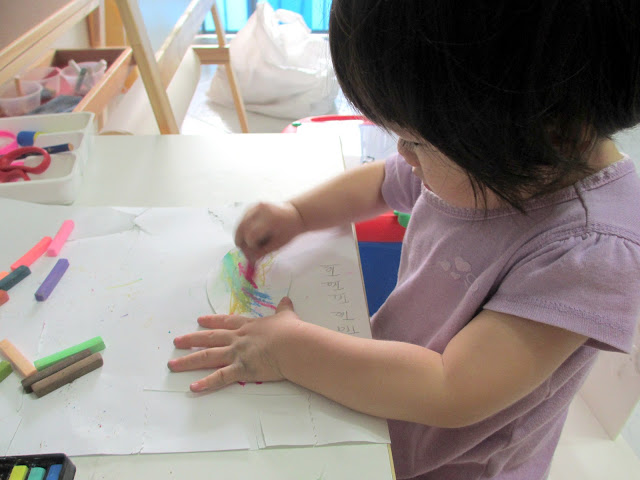 Firstly, she used some pastel chalks to decorate her third fish. The pastel chalks left her with very powdery hands but  when she saw her hands were filled with different colours she was appeared to be quite happy. 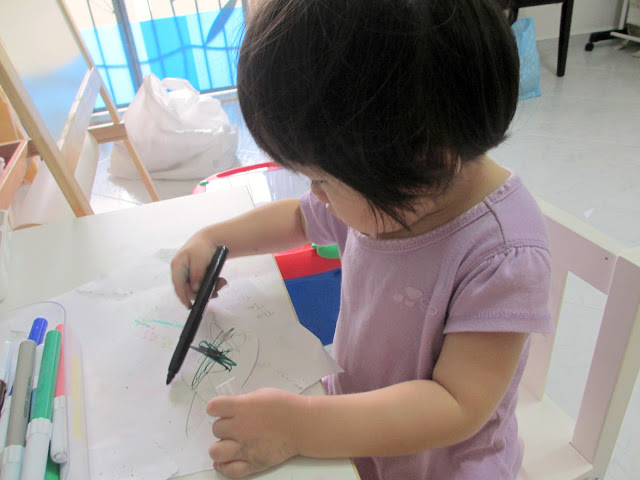 Then she went on to decorate her last fish with her thick markers.
Finally all the four fishes were decorated and we washed our hands with Kirei Kirei which Le Xin often calls it as Bubble Soap. Just when I thought she was excited to start making her mobile, she ran off and started playing with something else again....
What can I say?
Toddlers will always be toddlers....
So I showed her the book again and asked Le Xin have you forgotten about this? She smiled excitedly and said Fish again. Then I asked her Would you like to make this now since we have our fishes "ready" haha. She nodded her head and followed me to the kitchen to gather some materials which include a hanger, four wooden chopsticks and a roll of masking tape.
I showed her how I taped the chopsticks together with a masking tape. Then I asked her What do you think we can use to hang the fishes to the chopsticks? She thought for a while and remained quiet....I assumed some kind of thinking should be going on at this point and I waited before suggesting What about we tie some strings to it? Le Xin nodded her head. We went to the storeroom to look for string like materials and in the end we found some left over yarn which we could use.
I helped her to attached the fishes to the yarn and tied them to the chopstick and as soon as it was done, Le Xin can't help but started playing with it. She shook her hands up and down and observed how the fishes that were hand made by her were moving.......It was just SO NICE TO WATCH hahahahaha 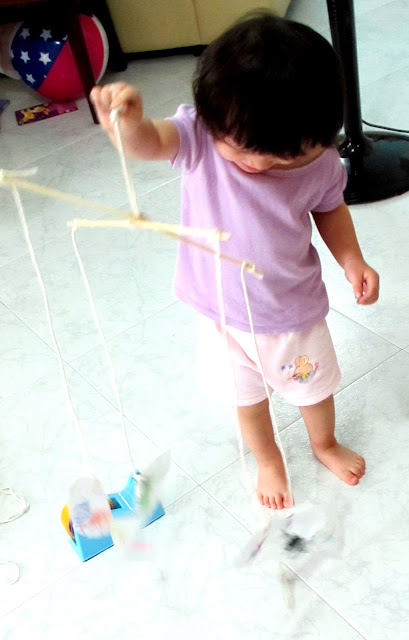 Le Xin was laughing away while playing with her fish mobile
When it was time for us to engage in the next activity, I helped her once again to attach her mobile to a hanger and display her work... 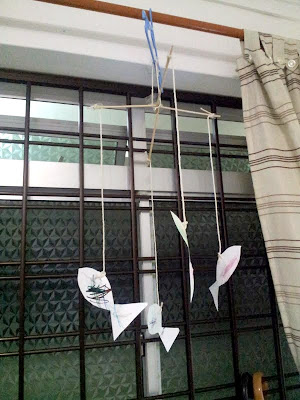 I knew I had to do this, so as to help her develop a sense of pride for the work she has done!
Great Job Le Xin :)
The amazing thing was....even after a few weeks later when I read the same story "The Star of the Show" to her in the bedroom, when she saw the picture of the fish mobile, she pointed to the living room immediately. I knew what she was refering to so I carried her to touch her mobile once again and she appeared delighted! I am very happy too, happy that she could relate to her previous learning experience.
Believing and embracing the fact that children are enthusiastic and observant, this learning experience helped me to see Le Xin's learning in a different angle. Firstly, I wish to work on  ways to capture her attention and retain her interest by keeping her engaged in a particular activity with a key factor. Secondly,  I finally witnessed how a simple story can help her to revisit her ideas/experience which is sooooo important. She remembered about her mobile even after WEEKS so this definitely proves to show something and it should not be taken lightly like a pinch of salt.....I want to further enrich her life.....I want to  research deeper on the pursuit of the possible as covered by Jerome Bruner :) Hooray!
﻿
﻿
Posted by MummyT2X at 16:38