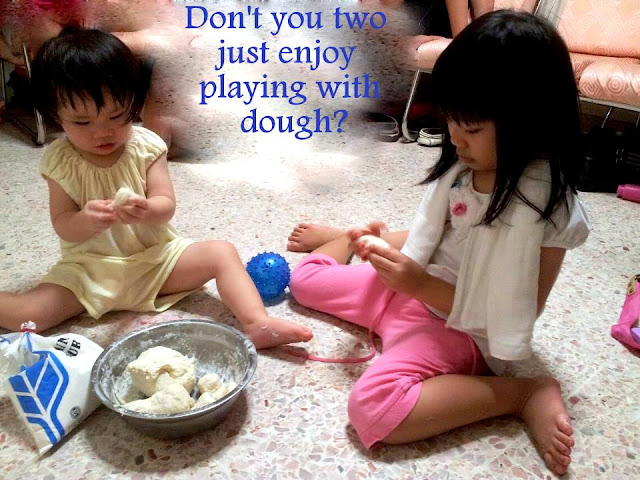 I was supposed to be fetching Le Xin home, but when I reached my mother in law's (MIL) place I saw Giselle and Le Xin playing together. They appeared to be very happy....role playing as different characters.
Then I went downstair to buy myself a packet of mixed vegetable rice for I know the two little ones will be enjoying each other's company. I went for a little shopping too at Prime supermarket to purchase some groceries. An idea came to my mind, why don't I purchase a packet of flour.
Don't ever underestimate what a packet of flour can do....it really has the ability to offer endless joy. When my MIL saw me with the flour, she asked ler ai chong si mi? which means "What do you plan to do?" I told her I am going to make something for the two of them to play.
I took a metal bowl, added some oil and salt in it. Then I told Le Xin and Giselle that we were going to learn how to make a dough.....Giselle carefully watched how I cut the packaging and added the flour in, Le Xin can't wait to start and started fiddling with the flour in the bowl. Giselle told Le Xin....Le Xin you must wait for your Mummy arh, you must be a good girl, cannot touch first... Perhaps Le Xin was really motivated by what Giselle said, she stopped and watched how I added the water to the flour before kneading it into a dough...... I knew I wasn't really good at this......the dough became quite sticky. I wasn't at all satisfied handling a wet and sticky dough with two little girls giving me a "Are you done?" kind of look.... Yeah they were really excited to start playing with the dough so I had to hurry up..... I really wanted them to be involved in the kneading  but since I did this activity at my MIL's place I was afraid to mess up the ground. Yeah she won't scold me but I felt bad :(
Finally, my MIL came to my rescue, she suggested to add more flour . So we did and finally the sticky dough dried up a little and I rolled it into a ball and added a little oil again to give it a glossy look. Finally it was all done...... I put the big chunk of dough into a metal bowl and passed it to the girls.... It's all yours I said... The both of the them started rolling and kneading the dough into different shapes.....Giselle even used the dough to form her name....Pre literacy skill/spelling with dough was really fun wasn't it?....I was really sad that my HP was low on battery so I could neither take photos nor video. At this point, I feel argh.....growling like a mad bear! Grr.... just kidding :p
I took a picture of Giselle's work with my MIL's HP and I will try to upload it here when I get hold of the photo.
I told Le Xin Hey do you think you want to share your dough with mama? She took a small bit of her dough and gave it to my MIL... My MIL was cute to the max. She told me the dough smelled like bread and she kept playing with it. She played with it for at least a good 15 mins. Haha even she was attracted to the texture of the dough and she kept asking me if the dough can be used to make Mee Hoon Kueh how funny right?
So the girls continued kneading and rolling the dough till it was getting late and I really had to bring Le Xin home. Of course she had to painfully bid goodbye to the dough session while Giselle continued with her dough play. Wow Giselle was really quite obsessed with the dough, I heard from my MIL that in the end, she even brought the dough back home to play.
Sometimes in a place that we are in, we might not find plentiful supply of stimulating materials that we can offer our child/children. If we are lucky to have least have a paintbrush we can still engage them in water painting. My intention is that a simple material should be the key player in the beginning which will instill an excitement and enthusiasm to do things. In Reggio Emilia, a lot of attention was devoted in selecting and presenting materials for the children in their preschool. Here in Singapore, we often struggle to find basic materials (not refering to recylced materials) which we could use without going off budget especially in mediocre preschools that we work in. I was told by some of my friend in the ECE field that many at times, even when they need a simple packet of ice-cream sticks they might need to seek for approval  too before they can purchase them to use for crafting. Well, I am a strong believer that sometimes it is all about offering a simple material where the children can explore. With the use of different channel of perceptions such as light or their own senses, the simple material that we provided them with.......will soon turn into something rich.... something of "stronger identity" don't you think so?
Posted by MummyT2X at 19:20