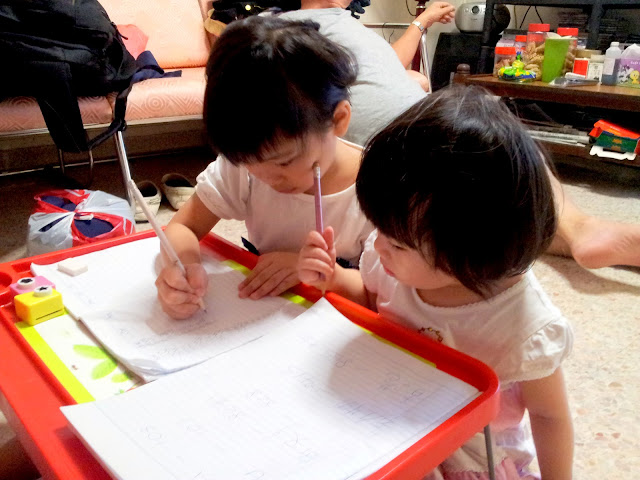 Was at my MIL's place when I observe some form of parallel learning going on! I saw Kaiting, Le Xin's cousin writing some words on the ground, so I offered her to write on Le Xin's red IKEA table instead. When Le Xin saw Kaiting using her table, she was mad angry and shouted My table, my table it's mine, jie jie used my table!
I explained to Le Xin the need for her to share her table and fortunately she could accept my reasoning. Then she began to observe Kaiting for a while before requesting my mother-in-law to give her some paper to do some writing too.
She observed what Kaiting was writing and how she held her pencil and tried to follow her!
According to Ages and Stages by Karen Miller, children aged two are "groupies" meaning they enjoy being near other children. Of course Le Xin is one of them too! She likes to imitate what other children are doing. If Kaiting jumps or hops around, she follows her too! Although she is still not ready to give and take, often demanding Kaiting to give in to her needs and wants,  she still find it hard to refuse Kaiting's invitation to play which is really good. Most of the time, the minute Le Xin sees Kaiting, she gets really excited and pounces on her for a big cuddle! How sweet :) ﻿
Posted by MummyT2X at 17:00

Email ThisBlogThis!Share to TwitterShare to FacebookShare to Pinterest
Labels: Language and Literacy, Self and Social Awareness