Daddy Scott was busy helping out with the household chores on Saturday so Mummy had to do her part by keeping Le Xin busy so what should we do? 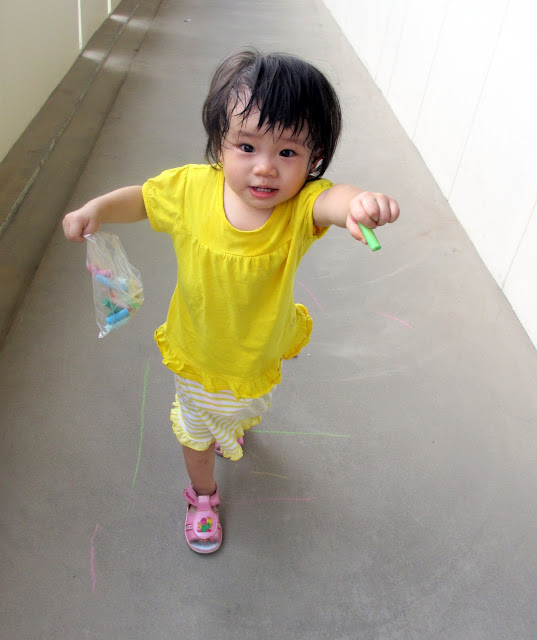 ﻿
What about engaging in some chalk play with me Mummy? 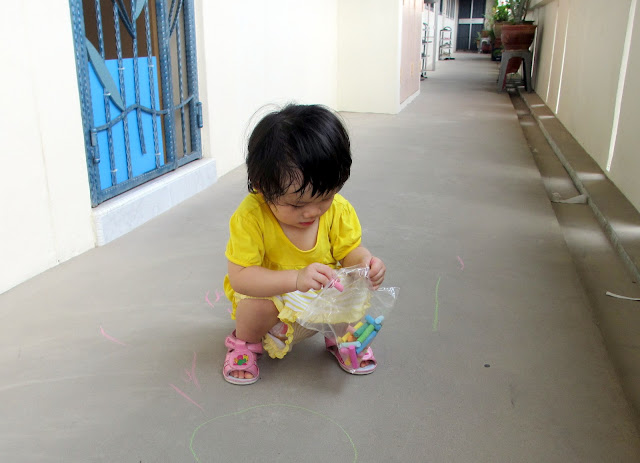 Le Xin was involved in decision making - deciding which chalk to choose first :) She took out a piece of light green chalk and guess what, instead of drawing it on the ground, she gave it to me first!!! Aww~ Mummy was SUPER DUPER TOUCHED to no end.......(alright I am exaggerating but I was really quite happy that she was willing to share her chalk with me) 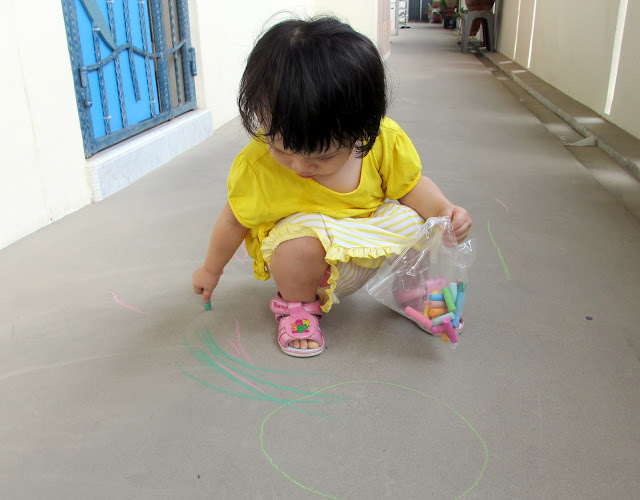 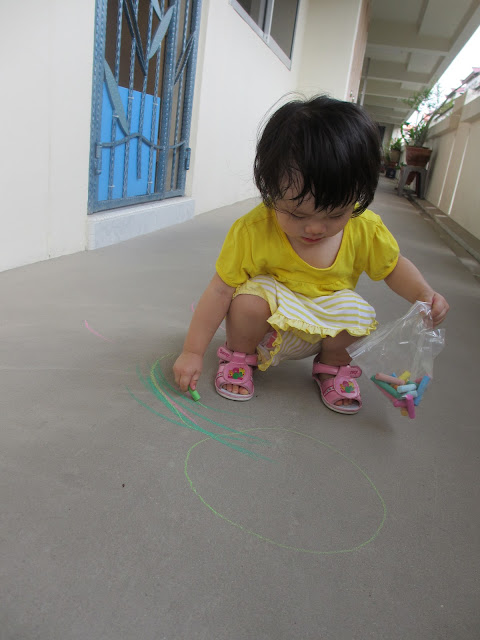 Then she took out another light green chalk to form some marks on the ground. After that, she got up and started jumping and running to another line that she has created in front of her......haha if Teacher Lin reads about this..... she will definitely know why........right? :p 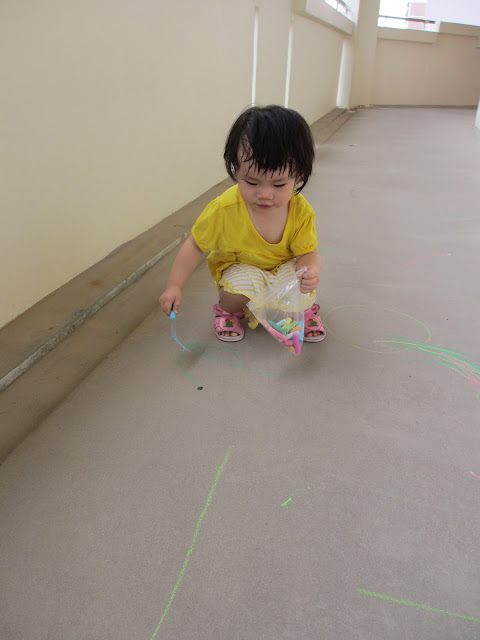 Le Xin ran to another spot and drew a few more lines with her chalk. Actually, I wanted her to trace the shadow  but the sun suddenly disappeared. Le Xin took a blue chalk and said blue then she offered me another piece of chalk as if she was initiating that I should draw together with her...... That's lovely! 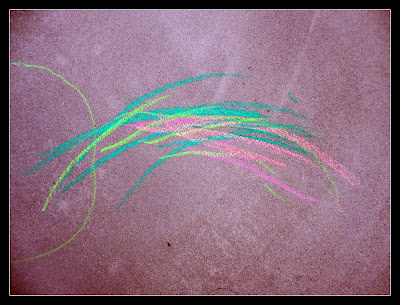 We went back to revisit what she has drawn earlier on and it looked like a beautiful rainbow....Yes I know I should not assumed it's a rainbow....it just happened to look like one :) 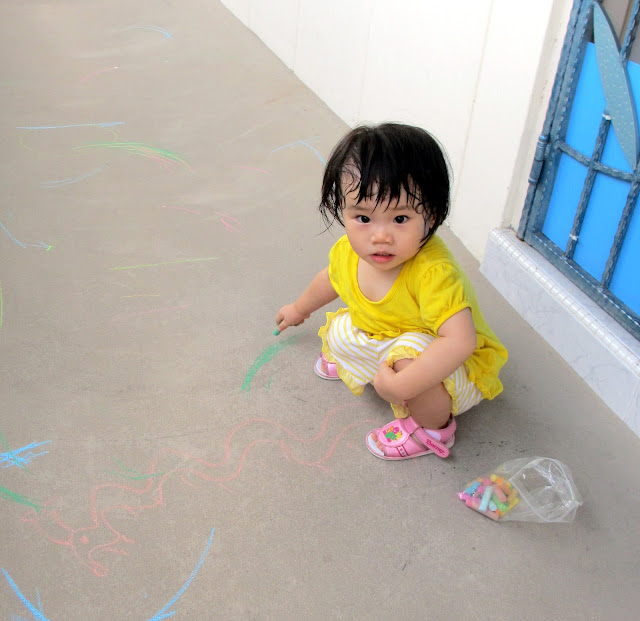 Actually, Daddy Scott was not very supportive of my idea in letting Le Xin engaged in this chalk play, somehow he felt that I was teaching her to "vandalise" Am I? I think Le Xin is smart enough to understand what we are doing.....bleah :p When he opened the door and saw how happy Le Xin was.....he seemed to forget what he had mentioned to me earlier on (I hope) hahahaha. When we had to end the chalk play, Le Xin gave me a really sad look and I know she really wanted to continue...but well I explained to her that I need to wash the ground and she accepted my explanation so she went in to wait for me.

I went to take a bucket of water and a brush to scrub the floor but before I did that, I shut the gate so that Le Xin will not run out of the house and guess what I saw? 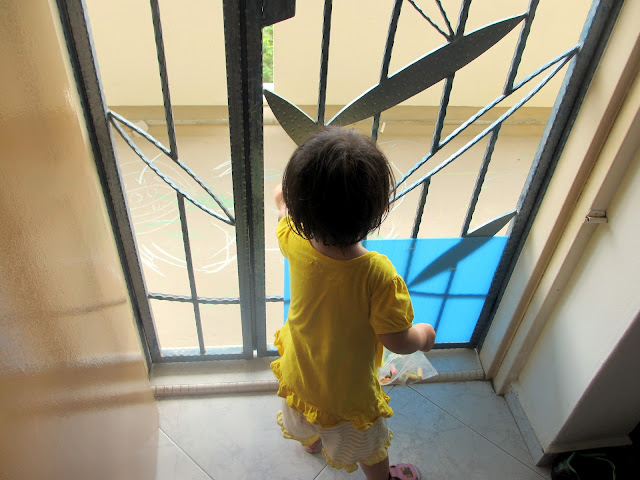 Le Xin saying good bye and waving to her "work"....... To us it's just chalk marks that were left on the ground but in her small little world, these mean a lot to her......It seems animistic but at that moment I really feel that her drawings are like real life objects to her.....

Le Xin observed how I washed the ground and I kept apologising to her that I need to "wash off" her work if not the neighbours might complain. After watching for a while, she took the packet of chalks, walked to her easel board and continued drawing.

This chalk play has taught me lots of things......above all I seem quite fascinated about Le Xin playing at the corridoor most of the time. Remember about her water painting activity? I just like the idea about her connecting to the world that she is living in.....trying to think about the benefits of living in a HDB :p  I learn that Le Xin really values what she is doing everyday, even though she is not even 2 years old yet. I embrace the Image of the Child which states that Every child should be respected and should be viewed as an independent thinker.....  Leaving you guys with a video of her playing with chalks.

I love you soooooo much each and every day Le Xin, hope you grow up to be this happy always :)

Email ThisBlogThis!Share to TwitterShare to FacebookShare to Pinterest
Labels: Aesthetics and Creative Expression, Language and Literacy