One evening, Daddy Scott suddenly came home with a surprise for us..... He bought  a second hand cute looking purple car for Le Xin somewhere in Dec 2011... I was a little shocked to find out that the car was only sold for $70 when all the functions were still workable, except it looks a little "old" but that's okay :)
It was funny how my friend Constance just told me (before Daddy Scott bought the car) Linda don't waste money to buy this kind of car because firstly it's too heavy so you won't bring it down often for her to ride and it spoils easily....look at mine I'm just putting it here because it's spoilt and Daddy Scott went to buy it....Mummy obviously didn't pass any comments, it was Daddy's first big gift to Le Xin afterall haha :) 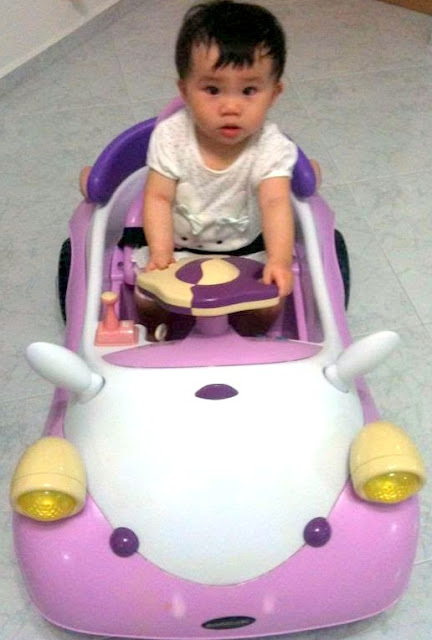 Le Xin in her purple car for the very first time! Back then, she was only 15 months old!


We tried all sort of ways to get her to step on the "paddle" and finally she did! She rode the car all by herself....We were so happy and were clapping like mad! Daddy Scott was laughing with her... and just take a look at where she placed her hands, I think she didn't know what was going on.... she was just stepping on the paddle and enjoying her "F1 race" round and round haha!

Suddenly, she stopped having the interest in riding on her purple car till two months later.....she wanted to sit on it again! This time Daddy was there to facilitate.... 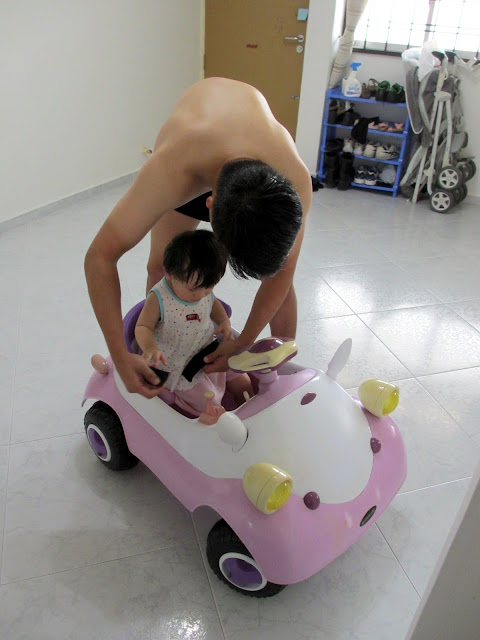 Daddy Scott was teaching Le Xin about safety rules..... You must put on your safety belt before you can start said Daddy Scott 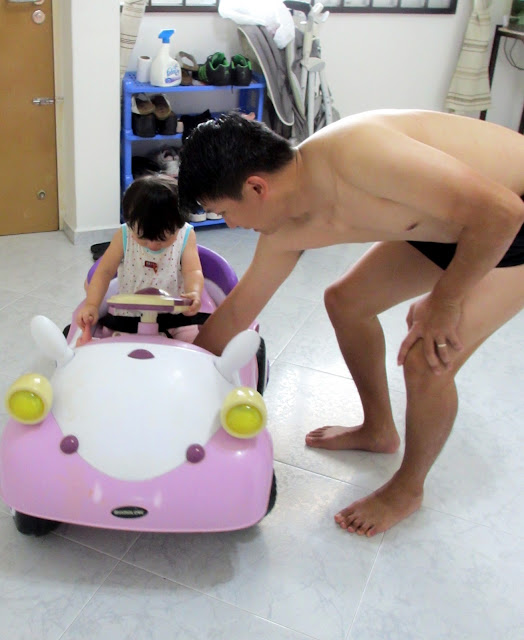 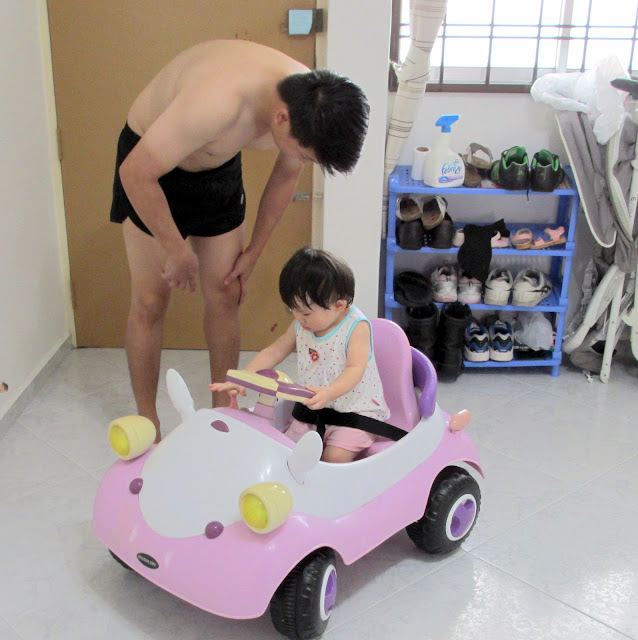 Daddy Scott was teaching Le Xin how to change gear hahahaha! F1 Race watch out for the next contestant! 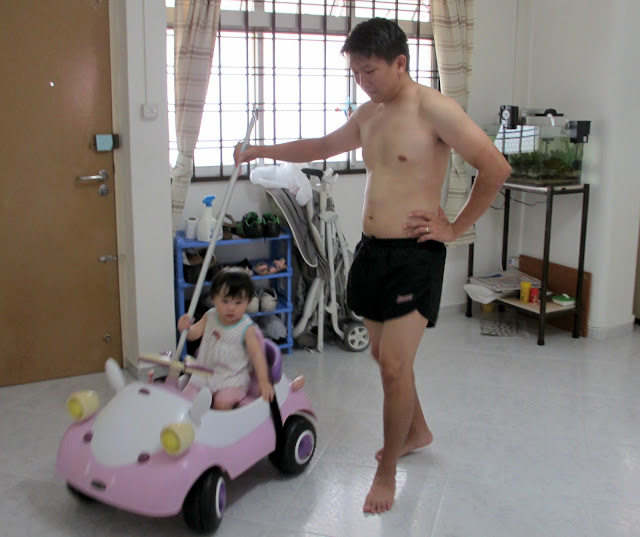 No matter how hard we tried.....Baby Le Xin just refused to step on the paddle....Hey comes the sweetest Daddy on earth to rescue the situation hahaha... He went to find a stick from the kitchen and helped her to press the paddle so that the car could move! Funny right? He probably has gotten the idea from this <---- click whahahahha! If you are wondering where did the stick come from? Yes it came from a mop too :) 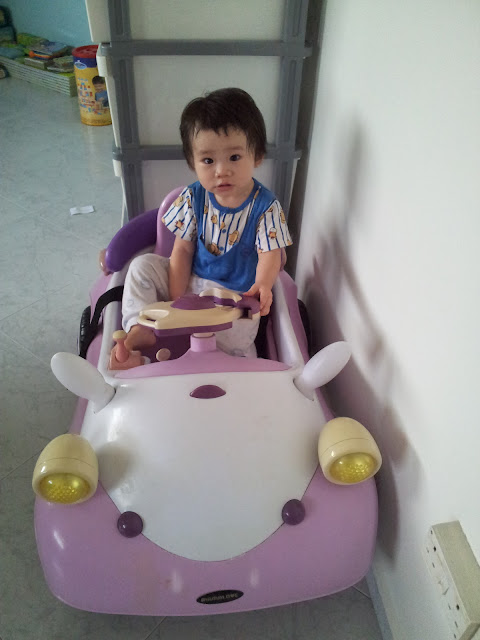 Le Xin "switches" her interest towards her car ON and OFF......On some days she really likes to ride on it, but on other days she would just climb in and try to manoeuvre using her ehhhh.... foot haha!

Since April, she has stopped playing with her car......Aww~ How sad... For once, we really thought that her car has turned into a white elephant so we just kept it in our spare room......

However, on the day before National Day,.... she suddenly went into that room and attempted to climb into her car once again. The battery was flat by then and so she couldn't ride it and was feeling quite disappointed :(

Daddy told her he will charge the car for her......so she waited for a day! On Thursday, National Day.... We were all ready to bring her out to ride her car. Yes, that's was her first car ride outside the house :) 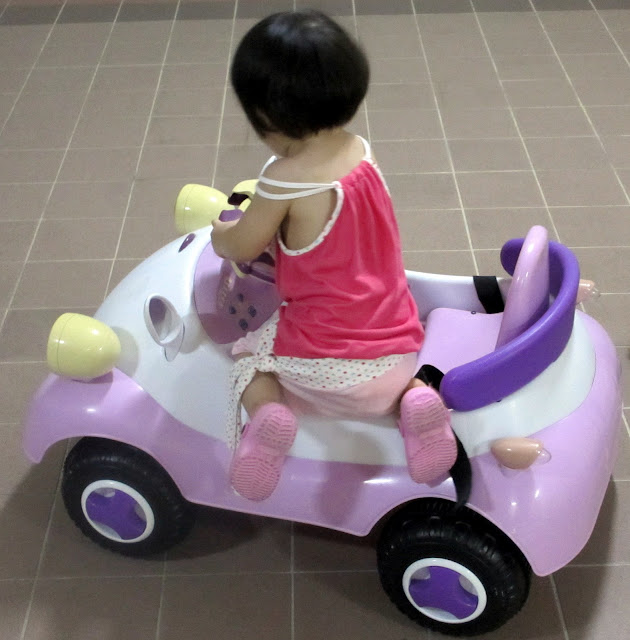 Can't wait to hop on! 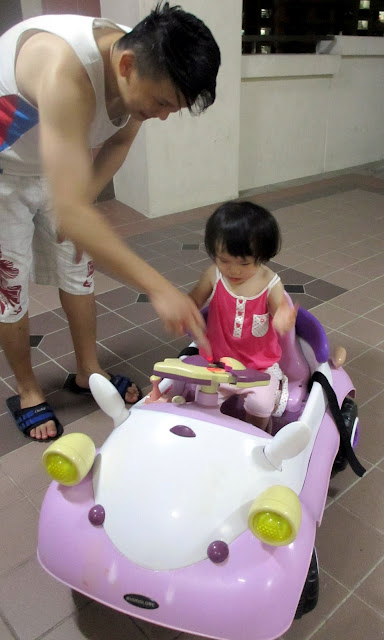 Daddy Scott was explaning to Le Xin the different sounds she could press on her steering wheel.

When Le Xin spotted Daddy's hand on the steering wheel, she just simply pushed it away. She was really trying to assert independence......Don't teach me what to do....I know how to control okay? hahaha

I like how Le Xin was moving her body as she pressed the button.....and she was laughing at herself too.....must have been quite funny right?

On Friday, after her Kids Kampong Outing..... Le Xin initiated to ride her car again....so once again we brought her out to the corridor. 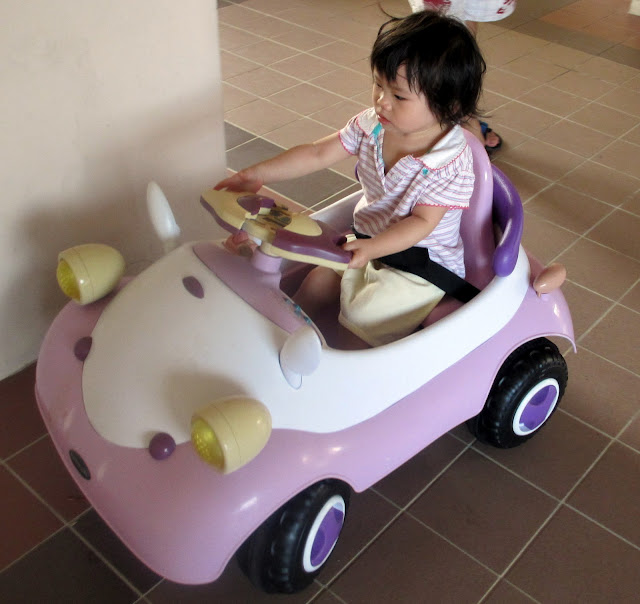 This time, she learnt how to use her steering wheel to make a turn..... 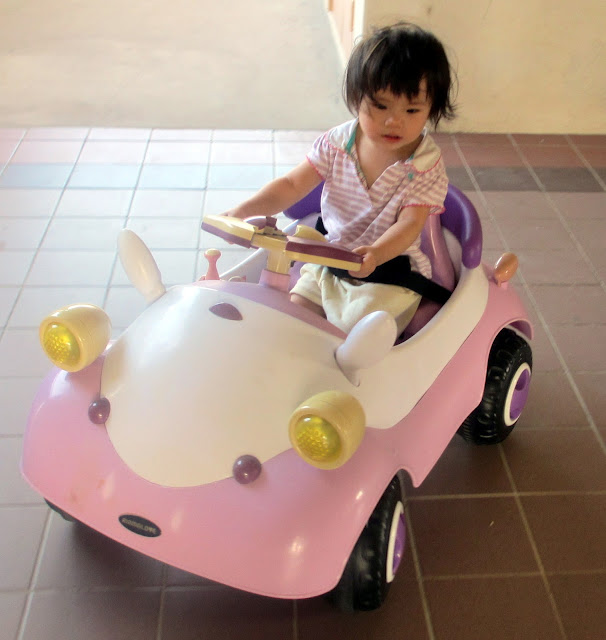 I saw a more confident Le Xin riding her car, she kept pausing each time she stepped on the paddle....somehow when she was 15 months she seemed to have a better control(just kidding).....Actually I guess at the point  she didn't know how to stop stepping the paddle....so she just stepped it all the way :) 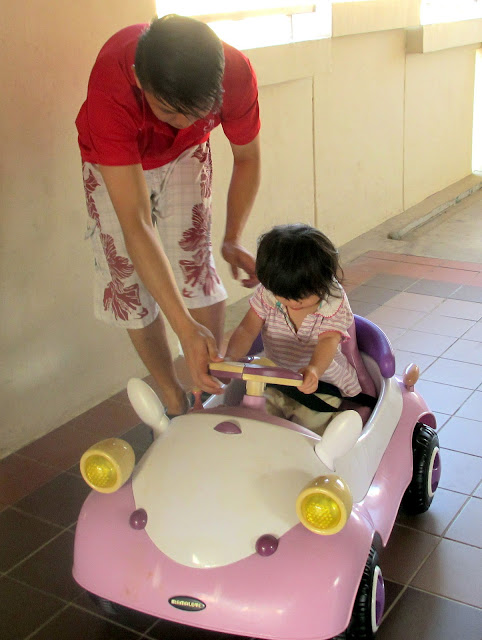 Daddy Scott was teaching Le Xin how to make a turn. 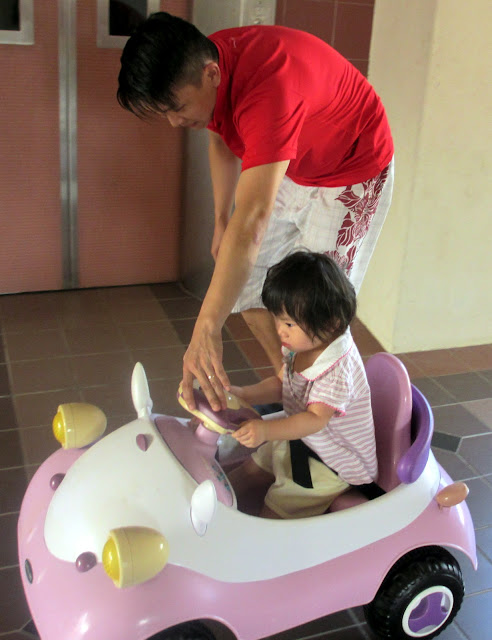 He helped her at some point of time too so that she will not end up banging on the wall or doing a James Bond's stunt....haha down the stairs yeah?

On Sunday, Daddy Scott and Mummy decided that we should be more adventurous....let's explore driving at the void deck! 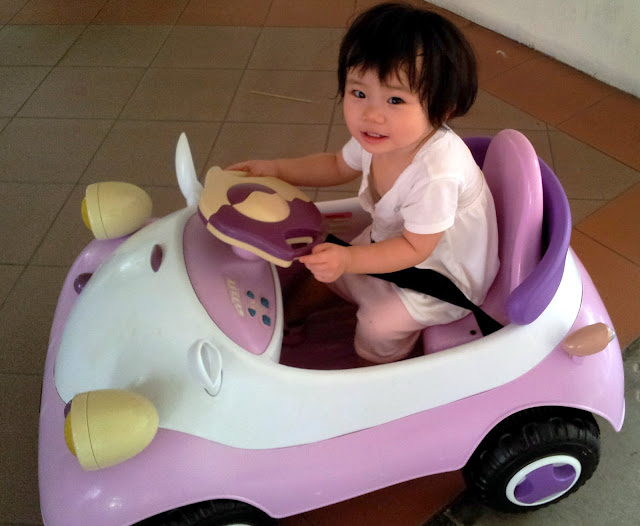 Yes, she was certainly ready,  haha look at how she bent over and held the steering wheel tightly... let's start to drive!!! 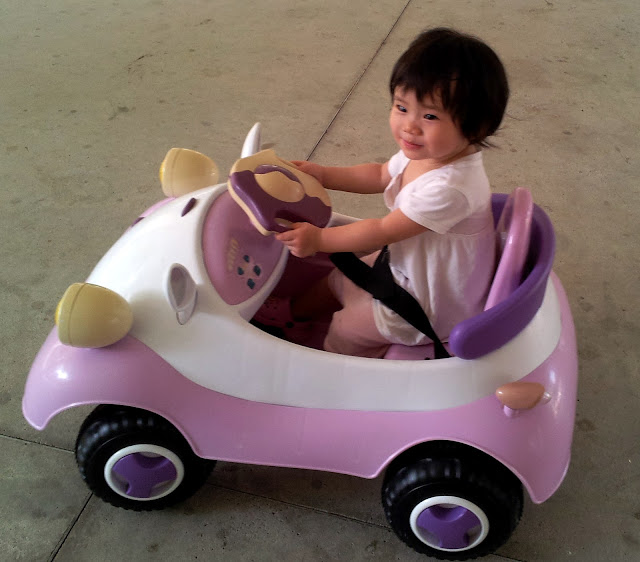 A very satisfied Le Xin on her ride.......Daddy Scott kept his promise....he brought you down to play :) 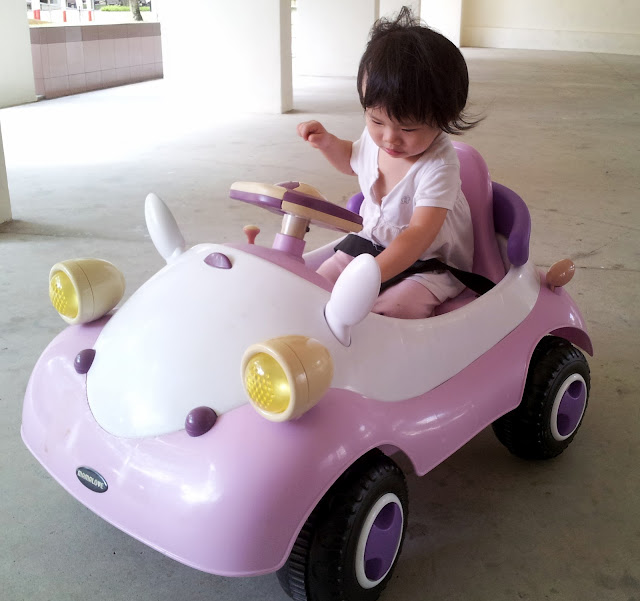 Alright how about switching on the headlight first? 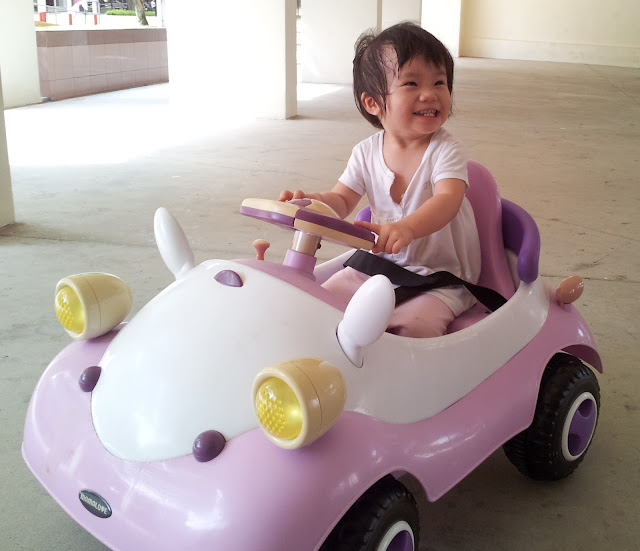 One of the most beautiful picture I took while she was riding.....look at her smile....filled with lot's of happiness :) 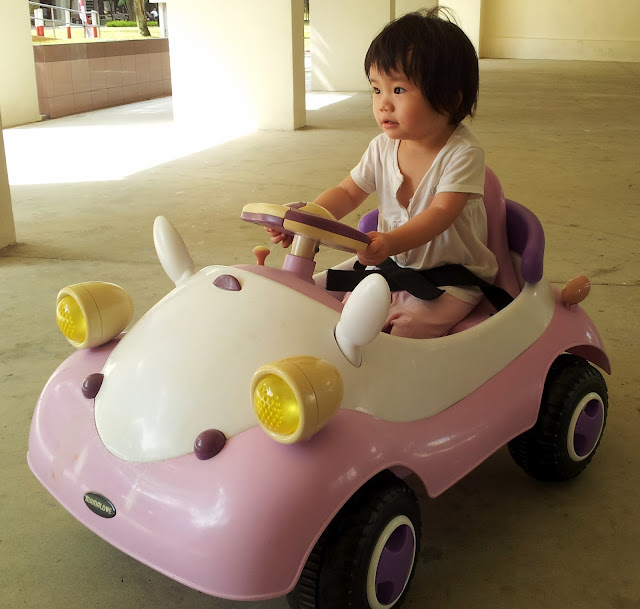 Then her eyes were suddenly fixed onto something.....What else??? Playground of course..... 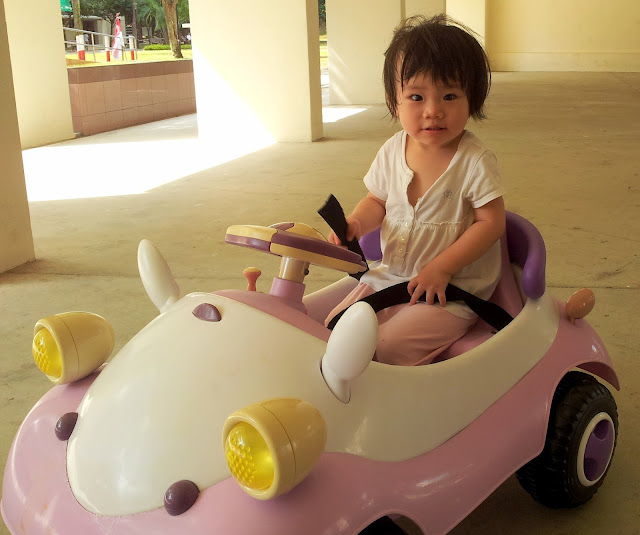 She took off her belt and with eagerness... she pleaded for her favourite place where she was really dying to go to........Alright alright, Daddy Scott brought her for a short play cause it was quite hot by then......while Mummy stayed put to look after her car!

What a nice experiences we had......it's always good to observe how she was playing a particular toy/game at different stages...and how she grows to be more confidence at handling it each time she plays....That's her development which we never want to miss.......
Cherish every moment spent....it's worth it!

Leaving you guys with a video of her playing at the void deck :) By then, she was really more confident in her driving skill haha so next challenge.....ride  to Tampines St 21 201....and park your car there so that I don't have to carry you to the bus stop on your way to school whahhahahaha.....

Continue to check out this blog for more of our adventures....Seeya :)