This is a simple post dedicated to a waterplay session which Le Xin had at the corridor. If you have read the post on Le Xin's waterplay at the service yard last year and her visit to VivoCity's Skypark for a big play at the pool site, you might have guessed that both Le Xin and I are big fans of Waterplay! This time, Mummy wanted to try out something simple.

Here's what we need: A basin of water (you need to be there to prevent drowing even though it's shallow) Lot's of different materials like bottles and bowls (of various sizes) straw, spoon, cups, ladle, funnel, plastic egg carton, toilet rolls and etc....Try using recycled materials so that you could save time in sourcing for materials which you might have to pay! 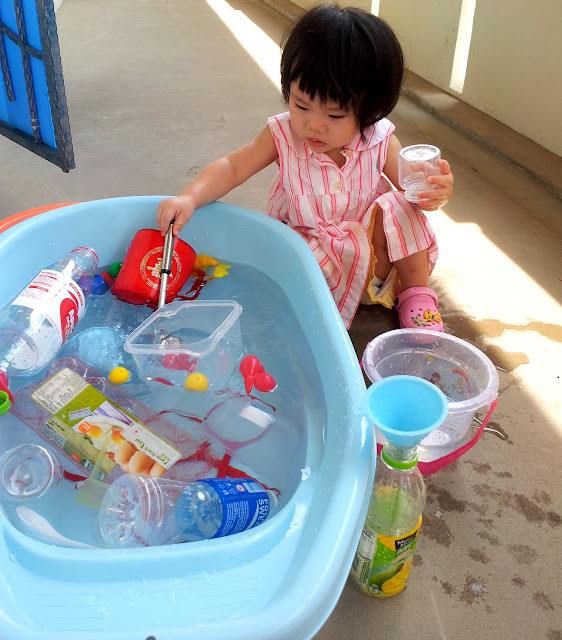 Intially, I thought she will be overwhelmed with the too many materials that I have placed into the basin... However, I think she was still quite okay with it and somehow this just gave her the opportunity to decide which materials to start off first. In the end, she chose to pick up a small plastic bottle and a ladle. 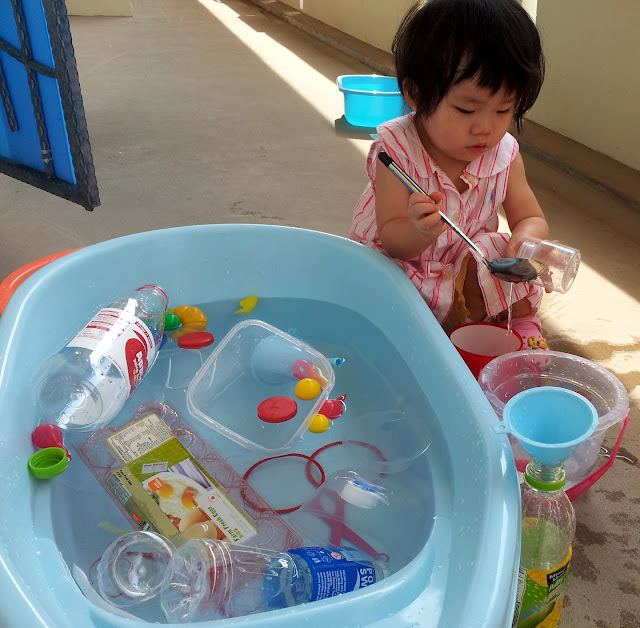 Observing Le Xin has always been a pleasurable experience. In this photo, I was interacting with her about her play at the same time watching how she poured the water from a small bottle to a big cup while trying to stop the flow using a ladle. She was really focused in what she was doing and sometimes I wished I could be as focus as her :) Notice a small blue basin behind her.......What's that?
|
|
|
|
|
|
|
|
|
|
|
|
|
|
|
|
|
|
|
V 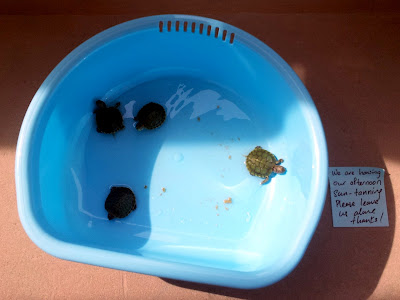 Haha it's my terrapins enjoying their sun-tanning! Then she went on to explore other materials, I encouraged her to use the funnel but she was not really into it, instead she preferred to use a bigger container to collect some water. As an adult, I think I would just put the container in and scoop up the water from the basin (perhaps just too impatient) but for Le Xin, I admire how she could sit there and patiently scooped the water using a ladle haha! 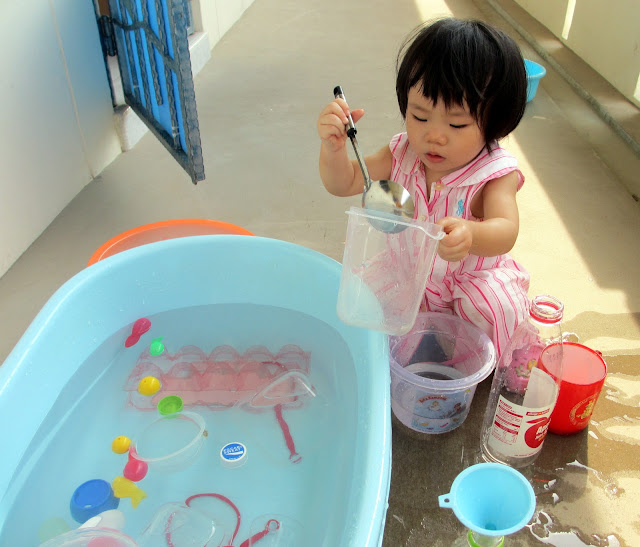 I seriously think that just by transfering water from one container to another, she has learnt so much about the properties of water. After filling up the container, she tranferred the water into a small pail! (Yes, the pail that we bought from Kids Kampong). 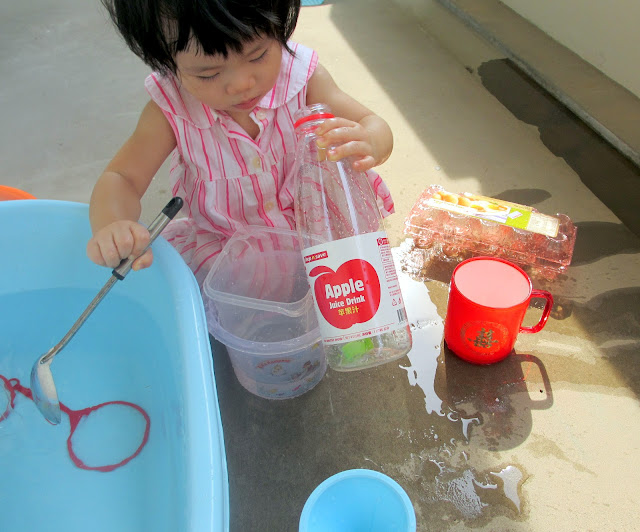 Here's come an interesting sitution.... She was playing with this cap from a mineral bottle, out of curiosity.... she placed into a bigger Apple Juice bottle and then she tried to tilt the bottle but she couldn't remove the cap. She shaked it a few times and it was still stucked. Then she became a little frustrated, she looked at me and said Help me! I asked her, what do you think we can do to take the cap out? She shook her head. Alright, how about we tilt the bottle again and try turning the cap at the opening. So she did what I suggested to her and it works! She placed the cap into the bottle once again and tried to remove it.....she did that a few times just to "prove" that she has learnt how to problem solve whahahaha I could see how satisfied her face looked when she managed to get the cap out from the bottle!


In this video, Mummy was desperately trying not to LAUGH....Noticed at one part, she somehow had this puzzled and innocent look? She heard a loud motorbike zoomed pass....and she blinked her eyes a few times as if trying to tell me "What's That?" haha so cute! You could also see how she learned to find out on her own that the mineral bottle could not be used to scoop up the shallow water in the orange basin as oppose to the small orange juice bottle in the blue basin.  As an observer, I chose to keep really quiet to observe....however after her play... I did highlight to her about her discovery!

It was pack up time for Le Xin, it wasn't too difficult to get her to pack up which was unexpected! I thought she would probably kick up a fuss but she was cooperative in helping to place all the materials back into the orange bucket. I took a very short video of her packing as I was helping her with the packing too.....What's the BIG IDEA? Playing together means packing up together....this rule applies to everyone including Mummy too! 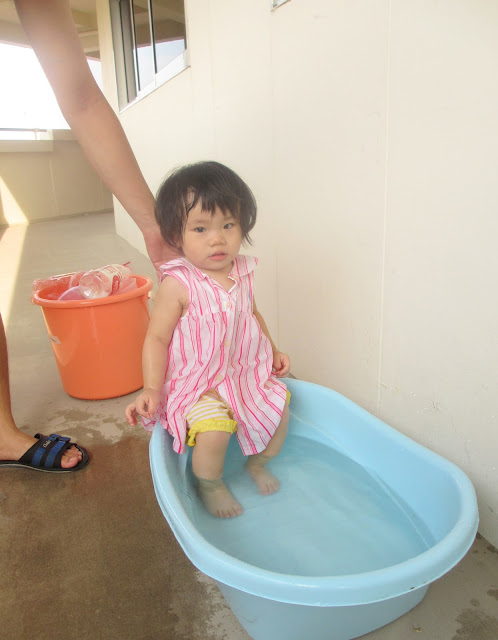 Time for a soak, Daddy Scott was helping to support Le Xin from behind.....Mummy was really afraid she might fall over! Of course she wouldn't miss soaking her hands into the water and making a splash too!

I used to plan how I would like to buy a fancy water-play equipment so that Le Xin could have lot's of fun playing with it. However, I reckoned this might not be a neccessary thing to do, Le Xin takes delight in small things, a simple water play experience like this has made her sooooooo happy! Nonetheless, I am not saying that commericial water-play equipment are not good, my ex-colleague bought one and I could tell from the picture in her facebook that it looks really cool....with functions like a child could pour water and observe how the wheel spins as the water flows and etc....What I am trying to stress is that, if you are on a tight budget, this is definitely something simple you can consider.....and best of all..it's just as fun! What's life without WATER haha leaving you guys with her "soaking hands and feet video"