Since Le Xin joined MFS, I've been starting to teach her about her name. I often ask her if someone ask you What your name, what should you say? and Le Xin will reply Le Xin. However these days, she will answer Koh Le Xin instead haha. At first, I used Dream English Youtube video to introduce her the concept of name. 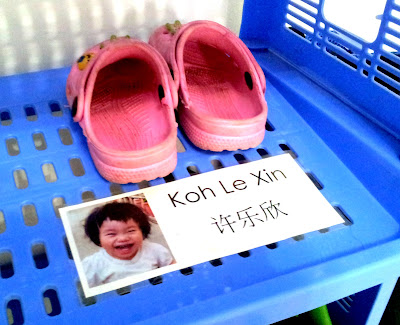 Then I also printed out her name and pasted it on her shoe rack so that when she keeps her shoes, she will see her name on it. I explain to her that Koh is her surname and her surname is same with Daddy Scott and my surname is Tan but I wonder if she understands what I am trying to tell her :p  However, I know that she can differentiate between her English name and her Chinese name because there was once she pointed at those Chinese characters and said Chinese name. Haha so cute <3
As I continued to observe her when she working at our Mini Atelier, I noticed  that she is beginning to scribble some lines on the paper that she was drawing on and after scribbling she will say my name. That was when I decided perhaps I should build on her interest but what should I do? I know nuts about teaching toddlers when it comes to name haha not my fault okay? ---> I did not take PG class before (eh....just an excuse :p)
I know about all those tracing her name with her finger using sand paper and other materials but I am not into geting her to write yet.....the whole purpose is to share with her name is Koh Le Xin and everyone has a name so that others could identify another person using his/her name. I also wanted her to know that there are different ways of writing her name (not language but font) and no matters how the letters look like they can still be used to form her name. So aww` I thought of carrying out something that appears to be quite boring. In fact, I was quite reluctant to do it initially but I decided to give it a go bleah :p
This was what I did first.... 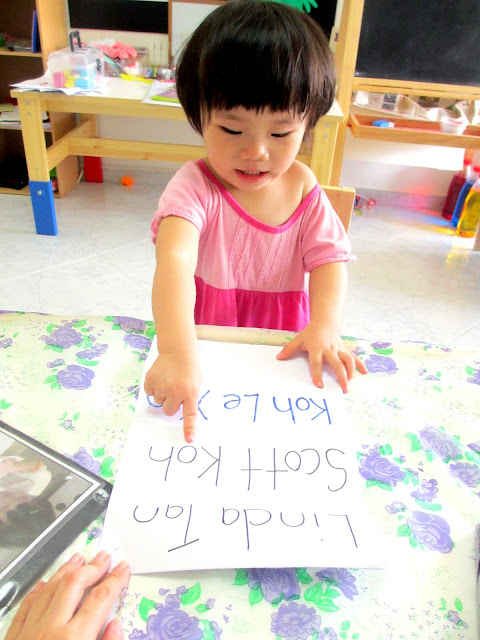 I showed her our names and shared with her that my name is Linda Tan (yeah yeah that's my real name but I did tell her that most people call me Lynz too!) and then the next name is Daddy Scott's name and guess what? She amazed me by pointing to the word Koh and said Koh......whahahaha I guess she could tell that Scott Koh and Koh Le Xin are the same? Haha I assume only :p
Then I prepared the materials that I was going to use for my "lesson" <---- (hate this word) whahahaha 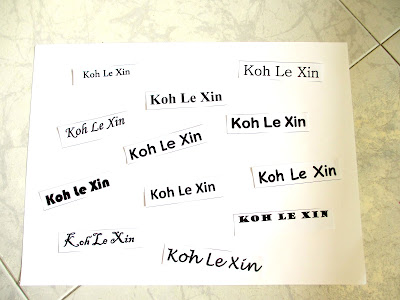 I sticked her name on a drawing board with all sorts of fonts.......a little too many but I only realised that after I have pasted but nevermind if I am willing to stop the activity if she is not interest. 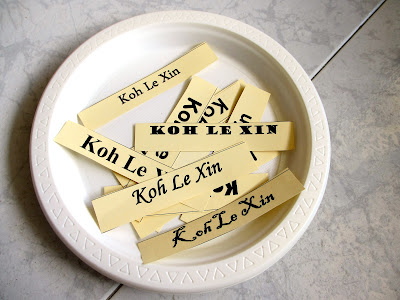 Then I prepared another set of fonts for her to paste. 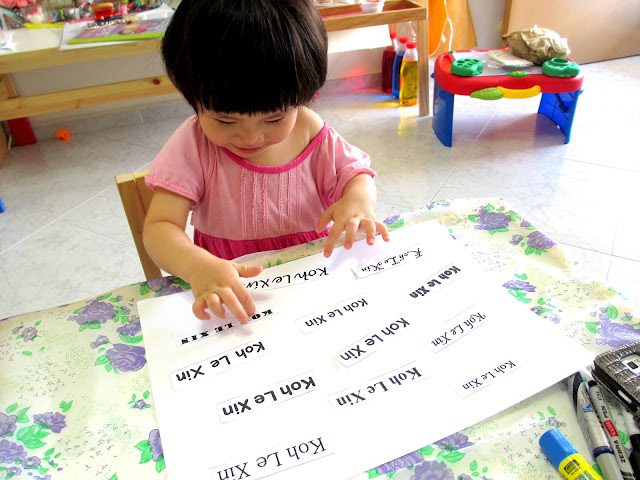 When I showed her the drawing board, I tried to make it sounds like a surprise by saying Ta Ta Ta Ta <-------- a small trick I always use with children and it works like wonders.....Duhz alright I know I am just childish, probably trying to excite myself only :p haha but Le Xin my zhu zhu na fell for it! She was amazed to see her name(s)! She tried to touch one of it and attempt to peel it out.... Ohh noo! Too much excitement is not good at times :(

In this activity, Le Xin will take one of the peach paper from the white plate (as shown above)  and try to match it with a similiar font on the drawing board. Sometimes I deliberately placed the peach paper near to a white paper with the wrong font and asked  Is this the same? next I waited for her to respond before saying yes it's not the same, it's different and then we tried to search again by asking her again so what about this one? Once we have found the right font, I will suggest okay let's stick the paper now and pass her the glue. This is a classic example of how I offer an intentional and directed activity for my child to engage in. I believe children need both teacher directed and self directed activities so that they learn to take instructions but at the same times are being empowered to suggest what they would like to learn. 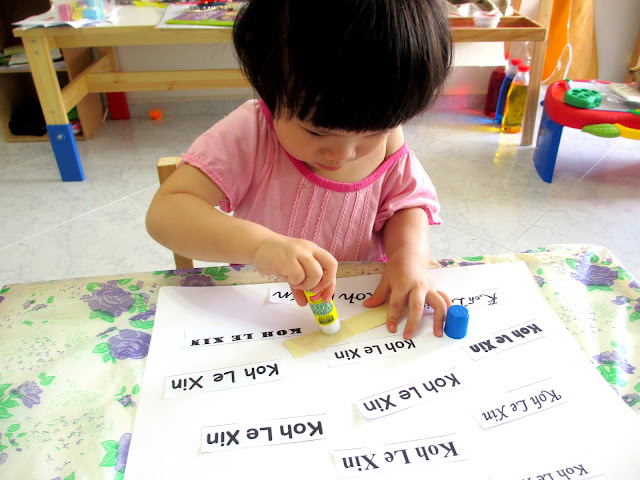 She put some glue stick on.... 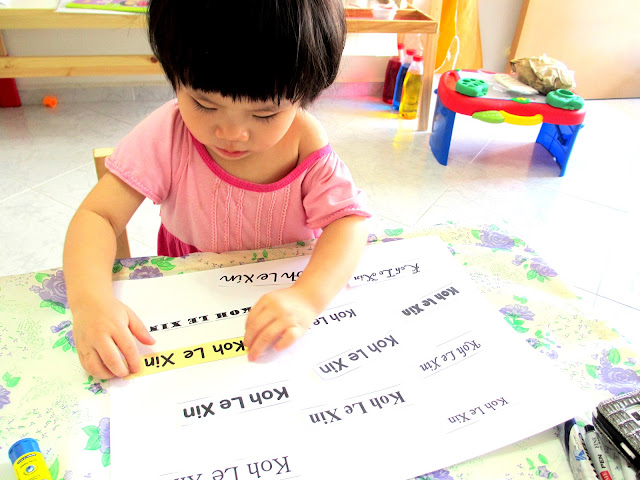 before she pasting her name on :)
Just when you thought this shouldn't be too difficult for her? Nah! Not going to bluff you that my daughter is a genius, watch this video first!

Actually, whe we were doing the activity I had to guide her to look out for  the font which was similiar to the one she was holding on to and which were the ones which were different. When I asked her yes or no, she even said yes or no back at me whahahahha. Sometimes, I need to remind her Mummy is asking you a question, I am not asking you to repeat after me before she replies me a yes or a no :p That's why I always stressed that the key to teaching young children is patience! Nothing else matters! We need to understand that children are not like adults they don't catch a particular concept as fast as we do. The most important thing is never compare a child with another child of the same age because every child is unique. It doesn't bother me a bit when she placed the font at the wrong place, I just corrected her and showed her where to put it in a gentle tone, I believe by doing so, she will naturally understand what to do at her own pace. 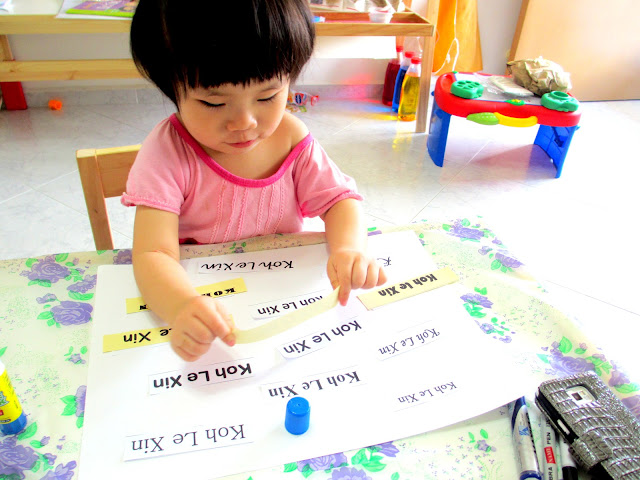 Here's Le Xin trying to look at the font first before pasting. I can't fault her even she pasted wrongly at least she has tried her best so as parents/educators we must always look at the child's effort <------That's very important!
What I like about Le Xin is that she is always very focus in doing what she is asked to do, unless it's something which she hates but Daddy Scott and I seldom force her to engage in something that she doesn't like to do either.
Have a look at this video...

She repeately filled her paper with glue before sticking it on so that it will stick well on the white piece of paper. I don't think I can be as focused as she is, I will probably just put a little glue at both sides and stick it on hahaha but that is what I admire about her. Having said that, do you know how difficult it is for me to have self-control? I have to keep reminding myself not to say "FASTER" or "快点". I need to be patient with her because I am a strong believer that if a child lives with tolerance, she/he learns patience,therefore I want to and need to model the same behaviour :) Daddy Scott always share with me "TALK IS CHEAP so it's better to WALK THE TALK!" whahahhaha 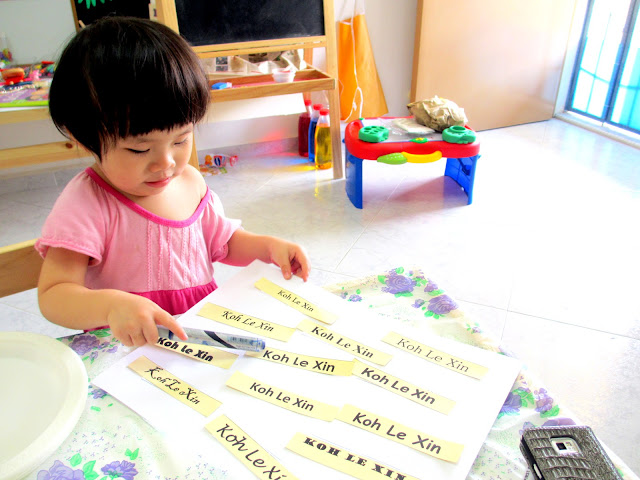 When she has completed her work and I asked her So what is your favorite font? She pointed to one of the tfonts and said This!
I guess in a way, I have met the objective of this activity because she was really able to differentiate the various fonts at the later part of this learning experience. Upon reflecting, I do know that deep in my heart it doesn't matter even if she could not differentiate because I was just trying to expose her to various fonts and to keep her engaged.
I hope Mummy didnt bore you with this activity, I really had a fun time observing you my darling girl AS ALWAYS.......
As I reflect, I realised that this learning experience which I have offered has helped Le Xin to understand the importance of perserverance. Children with perserverance are the ones who will keep on working at a task to complete it even when they find it is challenging they will choose not give up easily. I hope Le Xin grows up to understand that where there is perserverance, all things are possible ---> maybe one will only realise the success that comes with it......at the very end :)
Posted by MummyT2X at 11:30

Email ThisBlogThis!Share to TwitterShare to FacebookShare to Pinterest
Labels: Cognitive and Logical Thinking, Language and Literacy